The dynamic duo behind the 2011 smash Intouchables – Éric Toledano and Olivier Nakache – reunite for this new comedy in which a wedding threatens to erupt into an utter nightmare for the party’s cantankerous planner. A deliciously deadpan comic soufflé.

Max has run a catering company for 30 years. Today is Pierre and Helena’s big day. As usual, Max recruited his team of waiting staff, cooks, and dishwashers. He advised the couple on a photographer, reserved the band: everything to make the party a success. From the preparations to daybreak, we get a behind-the-scenes look at a wedding party through the eyes of the people working on it. They will all have to count on their one common quality: they know what it means to throw a good party.

With C’est la Vie! Eric Toledano and Olivier Nakache prove that they are the new kings of french comedy. 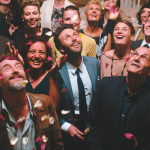 All images for this title are on our Dropbox